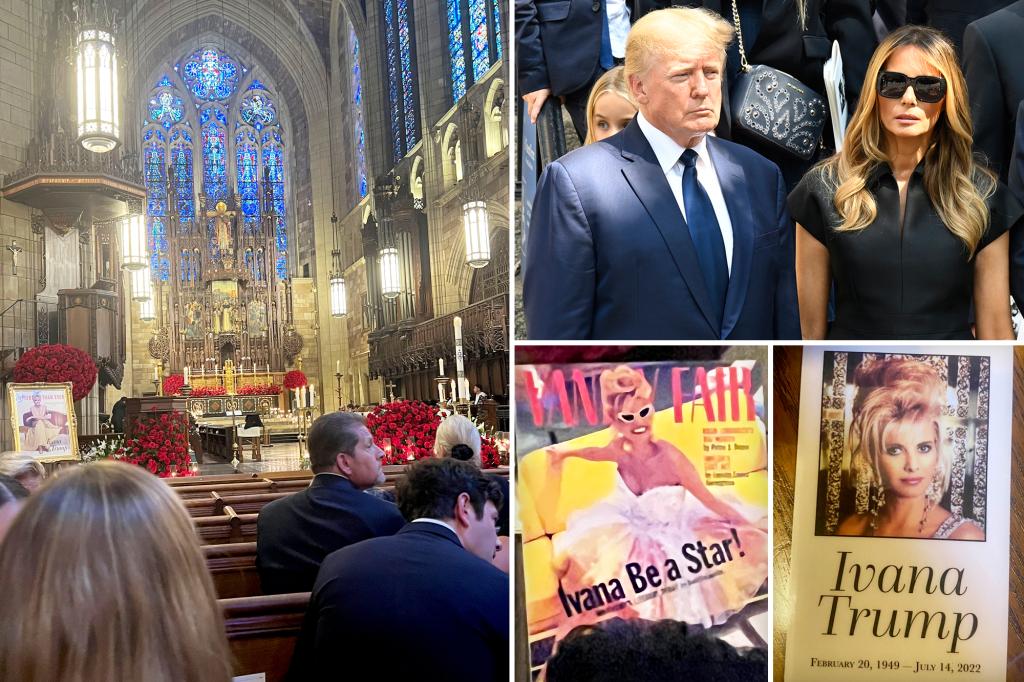 A glimpse of Ivana Trump’s funeral in Manhattan

Ivana Trump’s funeral at a historic Manhattan church on Wednesday was a glamorous final tribute to the 1980s style icon – complete with extravagant rose arrangements and an enlarged copy of her Vanity Fair magazine cover.

About 100 mourners gathered inside St. Vincent Ferrer Catholic Church on the Upper East Side to bid farewell to the late businesswoman and ex-wife of former President Donald Trump last week at age 73.

Two large images of Ivana framed in gold were placed next to her casket, including her 1992 Vanity Fair cover with the words “Ivana Be A Star” engraved on it.

Hillary Clinton’s name also appeared on the 1992 cover – but was removed from the version displayed at Ivana’s memorial.

The second framed photo also appeared to be an old magazine cover with the title “Better Than Ever…Ivana Trump.”

The century-old cathedral was also adorned with hundreds of red roses and candles for the opulent service.

The invitation-only funeral had been billed as a ‘celebration of life’ – and the invitation featured a photo of Ivana hurtling down the slopes.

Donald Trump and his three eldest children he shared with Ivana – Don Jr., Ivanka and Eric – were all in attendance.

The former president’s wife, Melania, their son Barron and Trump’s other daughter, Tiffany, were also among the mourners.

Ivana, who died after a fall in her home, is remembered as “a force of nature” and “the embodiment of the American dream”.