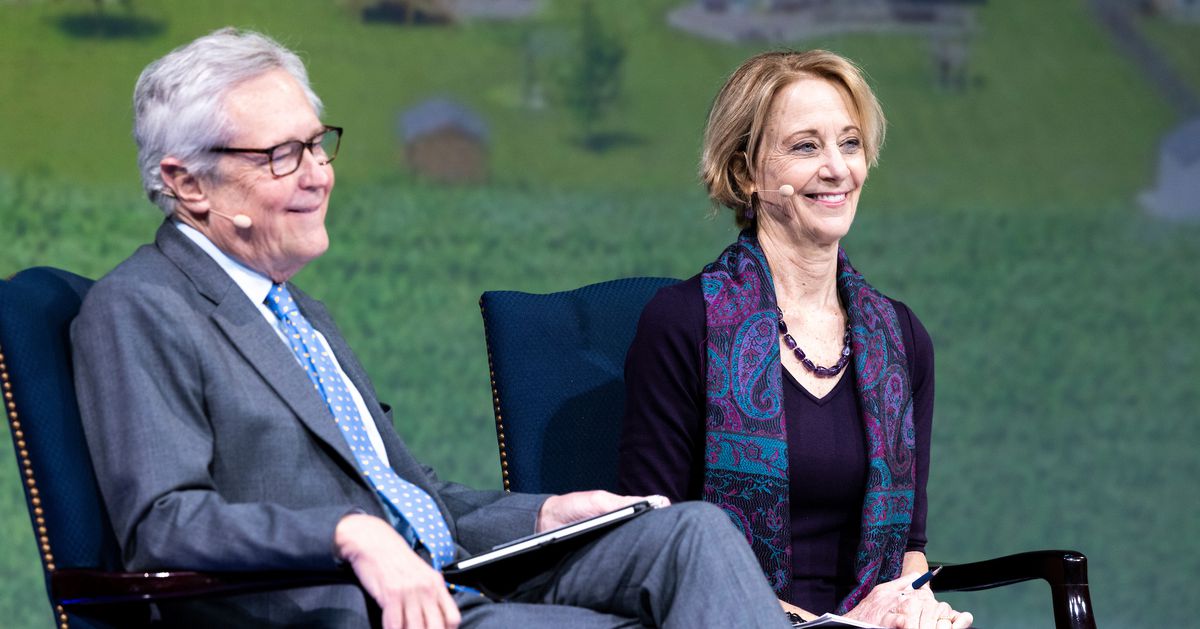 Creative local solutions are blooming across the United States, right under the noses of many national journalists and most news consumers, a pair of successful journalists at Brigham Young University said Tuesday.

Over the past decade, as America’s divisions seemed to deepen, James and Deborah Fallows immersed themselves in cities across the country and emerged with a unique vision of hope rooted in replicable portraits of resilience.

“A period of national tension seems to be leading to a period of great experimentation and under-hyped renewal at the local level,” said Jim Fallows.

The power couple discovered that prospect while criss-crossing the country for four years in a single-engine propeller plane, then published the 2018 bestselling book ‘Our Cities: A 100,000-Mile Journey to America’s Heartland’ and produced the 2021 HBO documentary “Our Cities.

On Tuesday, they brought the lessons they learned to BYU’s Marriott Center as part of the fifth lecture in the university’s six-part forum series this year on “Creating Beloved Community.” Martin Luther King Jr. popularized the idea of ​​building loving communities where people strive to benefit the common good.

Calling each other Jim and Deb while alternating time on the podium, the couple argued that Americans today and historically focus on national challenges and weaknesses and neglect not only the strengths of their own local communities, but also the opportunities they have to make a difference in themselves. .

The couple lived in China for several years, where they discovered the opposite was true.

“One of my views on China is that China often looks more imposing when seen from a distance and can seem more fragile when seen up close,” said Jim Fallows. “I will argue that the reverse is true in the United States right now – that our problems are most evident from afar (or seen nationally), and the sources of encouragement are most visible when you look up close” in local communities.

He said America’s history in nearly every decade has been one of well-known crises that affect the nation at large and generate lesser-known creative responses in its cities and towns.

Deb Fallows shared several stories of creative solutions the couple found around the country. The lessons they learned, she said, were that creative responses were most effective when centered on local public institutions like libraries.

For example, the library in Bend, Oregon, assigned community librarians who joined local clubs and organizations and worked with them on solutions. As a result, the library began offering tax assistance and held lawyer and nurse booking events to help those in need access resources.

She said libraries build trust because they provide non-judgmental services and also serve as second responders, helping their communities return to normal after trauma like a flood or other disaster. They played this role during the COVID-19 pandemic for many school children who did not have access to Wi-Fi or the equipment they needed to do their homework online.

She said local public arts are also key to renewing communities and underscored the need for communities to think about how to help their young people not only thrive, but stay or come back and continue to contribute. building their cities.

Libraries bring people together while local arts connect time because they explore history, present and future, she said.

A problem with national journalism

National reporters eclipse local forces when they travel to small American towns and only ask questions about politics or national issues, said Jim Fallows, who is known for his decades of reporting for “The Atlantic” and is the winner of both the American Book Award and the National Journal Award.

During a question-and-answer session after the forum, he said it was polarizing when national reporters asked ordinary people what they thought of Donald Trump or Barack Obama. It also makes small-town Americans seem one-dimensional instead of revealing the depth of their communities’ strengths.

The couple’s trips to town revealed what they said was great hope for America’s future. Their message was that cities thrive best when people are optimistic in a specific way. Self-indulgent optimism, or the hope that things might eventually get better in some way, is not as powerful as conditional optimism, or the belief that things might get better if everyone tries.

“What Deb and I have discovered across the country is that the closer you see the United States, the more you look at the neighborhood and the community, the more hope you have that the history of the United States over its centuries has been a sort of tension between development at the national level – sometimes for better, sometimes for worse – and responses at the local level. And at a time when issues at the national level are so well known, we feel like the local level is where you find the most encouraging things,” said Jim Fallows.

Five ways people can make a difference in their local community

They shared five ways BYU students can make a difference in the communities they choose to call home and build lives. He said they should learn to recognize the moment and recognize the leverage points.

Deb and Jim Fallows recently founded the Our Towns Civic Foundation to encourage the renewal of the American community.

Jim Fallows, who served as President Jimmy Carter’s speechwriter for two years, hosts a Substack site called Breaking the News. Deb Fallows is a linguist and published writer in The Atlantic, National Geographic, The Washington Monthly and others. She has worked at the Pew Research Center, Oxygen Media and Georgetown University.

The couple have two sons and four grandchildren.

Tuesday’s forum can be seen on demand at BYUtv.org.

The Deseret News has covered the previous four lectures in BYU’s series on “Creating Beloved Community.”

2. Rev. Dr. Andrew Teal of Pembroke College, Oxford spoke of building beloved community as an Anglican priest who walks alongside his friends in The Church of Jesus Christ of Latter-day Saints.

3. BYU students stood and cheered in November when the Reverend William Barber II called on them to join a Moral March on Washington next summer to revive and renew American democracy’s care for the vulnerable .

4. In January, popular “Hidden Brain” journalist and podcaster Shankar Vedantam drew parallels between the nonviolent tactics of Mahatma Gandhi and the Reverend Martin Luther King Jr. and the Sermon on the Mount of Jesus Christ.

The sixth and final conference in the series will take place on March 29, when author Amy Chua is scheduled to speak at the Marriott Center. Chua, a Yale law professor, is the author of “Battle Hymn of the Tiger Mother.”

Register to receive the newsletter

Get a behind-the-scenes look at what’s happening with The Church of Jesus Christ of Latter-day Saints and its members.

Samsung Galaxy S22 Plus vs iPhone 13 Pro: which one to buy?

My “dry” month of January: what I learned from a month without social media