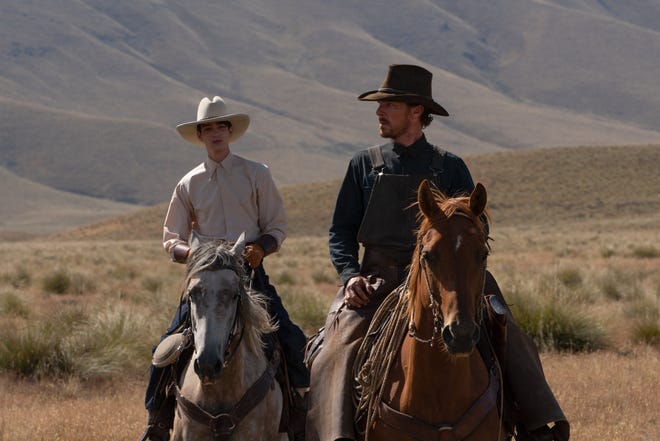 Is anyone ready for a psychological western starring a cruel but compassionate Benedict Cumberbatch?

“The Power of the Dog,” Jane Campion’s first film in more than a decade, is one of the films in the running for best picture at this year’s Oscars, which airs Sunday at 8 p.m. on ABC.

Unfortunately, none of them were filmed in Greater Columbus.

Here are five other movies that have featured Arch City in the past, and one that’s coming soon.

At the time, real-life reporters Eric Collins of WBNS-TV (Channel 10) and Lorene Wagner of WSYX (Channel 6) were among the film’s extras. While filming on the Statehouse grounds, television reporters interviewed Douglas, who plays an Ohio Supreme Court justice in the film.

Fans gathered outside Rhodes Tower during filming to cheer on Douglas after he completed each take.

“I Am Wrath” (2016) is a straight-to-video revenge film starring John Travolta. The actor plays Stanley Hill, a former special operations soldier whose wife is killed in front of him in a parking lot. He seeks revenge after his wife’s killers escape justice.

Filming locations that made the final cut of “I Am Wrath” include Capitol Square, Old Familiar Barbershop, Buckeye Donuts and Jack’s Diner, a Lynn Street institution that served its last meal in 2019.

People camped out for hours in spots around town during filming, and Travolta and actor Christopher Meloni, a former lead detective on NBC’s ‘Law & Order: SVU’, stopped to take photos and talk. with the fans.

Another direct-to-video movie starring Columbus is “Aftermath” (2017) starring Arnold Schwarzenegger. The revenge film is based on events surrounding a 2002 mid-air collision between a passenger airline and a cargo plane.

“They/Them/Us” is an independent romantic comedy released earlier this year that was filmed entirely in Columbus, primarily in the German Village, Brewery District, Victorian Village and Downtown.

The film was written by local couple Jon Sherman and Melissa Vogley Wood.

“It’s very loosely autobiographical,” said Sherman, associate professor of filmmaking at Kenyon College and director of the film. “The characters meet on a dating site in their 40s. They both have two teenagers and move in together. One of the teenagers is non-binary and uses the pronouns them/them.

Hence the title of the film.

Coming soon: “Bones and All”

Perhaps the most recent major film to be filmed here is the upcoming ‘Bones and All,’ starring heartthrob Timothee Chalamet and described as a romantic horror flick. Last summer, scenes were shot at the Greyhound Bus Terminal on Town Street and on a freeway, something Columbus has plenty of. The production also toured Cincinnati and northern Kentucky.

Also in the middle of the action was Spoonful Records, which sits near Greyhound station. Co-owner Amy Kesting said some of the lighting and sound crew came to the store on their break, and there were 1980s-style Greyhound buses and taxis parked outside.

“Bones and All” reunites Chalamet with director Luca Guadagnino. The couple worked together on “Call Me By Your Name,” a coming-of-age romance that received four Oscar nominations and won Best Adapted Screenplay in 2018.

Joe Blundo and Ken Gordon contributed to this report.

Does Washington no longer like the idea of ​​permanent daylight saving time?