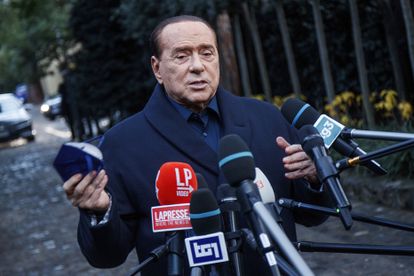 That Silvio Berlusconi, the omnipresent man in Italian politics in recent decades, dreams of putting an end to his career as President of the Republic is no secret in the transalpine country. This is not new either, he has already fantasized on other occasions with the Head of State. But this time, as Sergio Mattarella’s tenure draws to a close, he sees himself with options and has already subtly revealed his cards and set the machine in motion to garner support, although officially he’s been limited to say he will decide at the beginning of the year if you apply.

For the moment, there are no official candidates, but the current Prime Minister, Mario Draghi, proposed by several political representatives, has hinted that he will be available for the post.

Berlusconi, 85 years old and three times Italian prime minister, was quick to rule out a possible and strange duel with a rival of the stature and prestige of the former president of the European Central Bank. “Draghi is better where he is, this government is a great success and must continue like this until the end of the legislature,” he said. The octogenarian magnate is convinced that he has a real chance, something few argue, of reaching the Quirinal Palace, seat of the Presidency of the Republic. And his center-right allies allow him to continue dreaming by whispering loyalty to him. A few days ago, he received personalities from the right-wing coalition of which he is also a member in his Roman villa to address the question of the election of the head of state and to offer an image of unity.

The ritual usually works in reverse, it is the parties which present their candidates, for whom the Parliament then votes. Spontaneous applications are not frequent. Additionally, history says that ringing names end up being discarded. But Berlusconi, the man who always comes back, to the amazement of those who have left him for political death on dozens of occasions, has shown that he is a constant challenge for the the status quo.

His way to the Quirinal is strewn with pitfalls. The owner of Mediaset has been marred for years by the scars of corruption and legal storms. Indeed, the votes for the presidency of the Republic will coincide with the holding of a trial hearing which attempts to elucidate whether he bought witnesses in a previous trial in which he was accused of inciting the prostitution of minors. and in which he was acquitted on appeal. This is one of several court cases that have emerged from the famous â€œbunga bungaâ€ parties, what the politician and tycoon have defined as â€œfancy dinnersâ€.

They do not fit either with the classic profile of the head of state, more neutral and diplomatic, the constant and well-known gap of the old man. knight and the grotesque style that it has always retained. Like his habit of defining former US President Barack Obama as “handsome and tanned” or his style taunts: “It’s better to be passionate about beautiful women than to be gay.”

Join MRT to follow all the news and read without limits.

â€œRegarding his image, his choice for Italy would be a disaster. You need another profile, you need someone whom the European Union recognizes as trustworthy, expert, competent, â€political scientist Piero Ignazi told this newspaper. “It has always been in the grip of megalomania, this movement no longer surprises me now,” he adds.

The expert sees no possibility in this application. “It does not exist, it is a pressure maneuver from the center-right to try to have more voice in the elections and negotiating power,” he said. And he specifies: â€œThe right has no relevant personalities to present for a post like that of the Presidency of the Republic, neither within the political parties that make up the coalition nor outside them.

Ignazi opts for Draghi: â€œFor seven years, we would ensure the presence of a relevant personality, of great competence and of great international recognition, of a sure democratic faith, which are essential requirements for a President of the Republic. Few meet these conditions like him â€.

The expert also underlines the key role that the Italian head of state has assumed in recent years, as arbiter of politics and guiding government formations. “It is not something symbolic long ago, it has acquired a fundamental role in recent decades, which is why electing the president is much more important than in the past.”

Overall, analysts argue that the election of Berlusconi as the head of Italy’s highest state institution is highly unlikely given his controversial political, economic and judicial trajectory, which does not make him a figure. consensus with options to obtain the required votes, two-thirds of Parliament or an absolute majority of the third vote.

Gianfranco Rotondi, classic of Christian Democracy and minister in the third and last government of Berlusconi (between 2008 and 2011) is, on the other hand, optimistic with the candidacy of the former Prime Minister. In an interview with The Corriere della Sera, the politician pointed out the sympathies aroused by the magnate in the ranks of the center-left. “That of Berlusconi and the Italian left is a story of unknown but deep relations,” he said. And he clarified: â€œThere are members of the Democratic Party who tell me: ‘One like [el ex primer ministro Paolo] Gentiloni doesn’t even answer the phone. As a member of the opposition, when I called Berlusconi, he not only answered me, but he solved a problem in my constituency in three days â€.

He also believes that the dynamics of political games to elect the head of state can favor Berlusconi. â€œThe Quirinal elections are like the votes of the president of the Banque Populaire. Some vote for the pharmacist because he is always available, while others choose the local doctor because they see him as a friend. These are choices that are earned in relationships, an area in which Knight it’s unbeatable â€.

For now, Berlusconi has already launched his campaign to attract support, in his own way and also beyond the friendly ranks. The magnate sent to various parliamentarians, ministers, party leaders and also to a few businessmen dozens of paintings from his impressive art collection, which he keeps in the gallery of his villa San Martino. These are more than innocent Christmas presents that coincide, besides the election of the head of state, with the 50th anniversary of the ex-president’s art gallery, which includes hundreds of pieces, some of which are large. value, like a Titian valued at five million euros.

Its intention is to strengthen existing political relations and consolidate those that are still in the nascent phase, therefore, among the recipients are not only the leaders of the center-right, such as Matteo Salvini, Giorgia Meloni or Antonio Tajani, but also representatives of other parties, such as the Minister of Foreign Affairs and former political leader of the 5 Star Movement (M5S), Luigi Di Maio.

In his latest speeches, Berlusconi has gone ecumenical and embraced causes he once despised, such as citizenship income, the historic workhorse of M5S. He seeks to show the profile of a statesman, the father of the country, convinced that his rise to the Quirinal would reassure parliamentarians who fear that Draghi’s departure from the grand coalition government will trigger political chaos and lead the country. in early elections. .

In addition, as part of a calculated image strategy, Berlusconi has increased its presence on social networks. His last appearances were congratulating his supporters on Christmas in royal house style, with a video next to the gigantic tree with his dog Gilda in his arms and with a photo with his partner, MP Marta Fascina.

Disclaimer: This article is generated from the feed and not edited by our team.