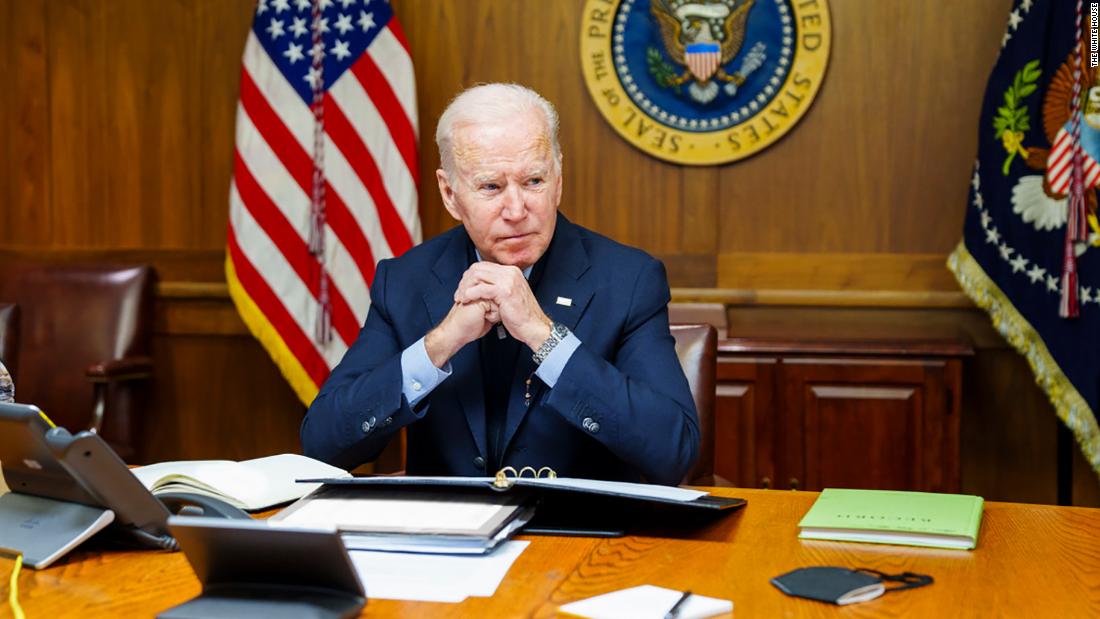 “President Biden has made it clear that if Russia undertakes another invasion of Ukraine, the United States, along with our allies and partners, will respond decisively and impose swift and severe costs on Russia. President Biden reiterated that a new Russian invasion of Ukraine would produce human suffering and undermine Russia’s position,” the White House said in a statement, adding that Biden “was clear with President Putin that if the U.S. remain ready to engage in diplomacy, in full coordination with our allies and partners, we are also ready for other scenarios.”

The call between the two leaders comes hours after the United States moved some of its forces out of Ukraine and ordered the evacuation of most embassy staff on Saturday amid growing fears of a Russian invasion. of the country can take place in the coming days. The moves were another sign that the United States fears Putin could order an invasion at any time, just a day after Biden’s national security adviser warned Americans in Ukraine to leave and that military action could start with an aerial bombardment that could kill civilians.

A senior administration official told reporters Saturday afternoon that the call between the two presidents was “professional and substantive,” but “there has been no fundamental shift in the dynamic that has been unfolding now since Several weeks”.

“Both presidents have agreed that our teams will remain engaged in the days ahead,” the official told reporters after the call. “Russia may decide to take military action anyway. Indeed, that is a separate possibility.”

The official said Biden reiterated U.S. ideas on how to strengthen European security while addressing some of Russia’s security concerns, but noted that he “remains uncertain whether Russia is interested in to pursue its objectives diplomatically”.

Asked if Russia made the decision to invade, the official said: “I think the honest answer to that question is that we don’t have full visibility into President Putin’s decision-making. “.

“But you know, we’re not basing our assessment of this on what the Russians say publicly,” the official continued. “We’re basing his assessment on what we see on the ground…which is a continued Russian buildup on the border with Ukraine, and no significant evidence of de-escalation, or really any interest in de-escalation.”

Ushakov said the conversation “took place in an atmosphere of hysteria over the supposedly imminent Russian invasion of Ukraine by US officials, everyone knows that.”

Ushakov added: “The pressure around the theme of the invasion was carried out in a coordinated manner and the hysteria reached its climax.”

According to Ushakov, Biden told Putin that he was “committed to the diplomatic track and had set out a series of considerations that he sees as addressing many of Russia’s concerns.” Putin said the United States and its allies had “inflated” Ukraine with new weapons and encouraged provocations by Ukrainian forces in the Donbass region and Crimea, Ushakov said.

The Russian Foreign Ministry on Friday accused Western countries and the press of spreading a “large-scale disinformation campaign” about an alleged imminent Russian invasion of Ukraine “in order to distract from their own aggressive actions”.

“At the end of 2021 and the beginning of 2022, the global information space faced a media campaign unprecedented in its scale and sophistication, the aim of which is to convince the world community that the Russian Federation is preparing an invasion of the territory of Ukraine,” the ministry said in a statement posted on its website.

All eyes on Ukraine

The United States has estimated that Russia has more than 100,000 troops near the Ukrainian border, adding thousands this week, according to an administration official. National Security Adviser Jake Sullivan told reporters on Friday that a Russian attack on Ukraine could begin soon, starting with aerial bombardments and missile attacks. He advised all Americans in Ukraine to leave the country for their own safety as soon as possible.

“We obviously can’t predict the future, we don’t know exactly what’s going to happen. But the risk is now high enough and the threat is now immediate enough that that’s what caution demands,” he said. -he declares.

In the Ukrainian capital, Kiev, Mayor Vitali Klitschko described the preparations the city is taking to safeguard “essential and social infrastructure” in “the event of a possible emergency”.

In the statement posted on Telegram ahead of the weekend, Klitschko said, “Our efforts are aimed at both preventing or overcoming possible provocations and resisting military attack.”

The senior administration official said on Saturday that the United States would continue and even increase its support for Ukraine to help it defend itself if Russia continues to escalate its aggression.

“In terms of our plans for the future, I think President Biden and other officials have been clear that if Russia continues to escalate, the United States will continue to increase its support. to Ukraine, to enable it to defend itself, and you know that approach has not changed,” the official said.

Saturday’s call was the latest attempt at diplomacy between the two leaders aimed at defusing the situation. Putin and Biden last spoke on the phone late last year. Previously, on December 7, they had negotiations by videoconference. The first face-to-face meeting between Putin and Biden as heads of state took place in Geneva in June 2021.

The Russian president has also engaged a series of Western leaders in so far unsuccessful talks to defuse the situation.

Attempts at diplomacy with the Russians would continue, the senior administration official said.

“We remain committed to keeping alive the prospect of de-escalation through diplomacy,” the official said. “But we also have clear eyes on the prospects of this, given the obvious steps Russia is taking on the ground in plain sight, right before our eyes. The stakes are too high not to give Russia all the the chances of averting what we believe to be catastrophic action So, as always, we are continuing on two tracks.

Biden, who is spending the weekend at Camp David, took part in a virtual meeting Friday from the White House with leaders from Canada, the United Kingdom, France, Germany, Italy, Poland, Romania , NATO, the European Commission and the European Union. Board to discuss escalating tensions.

Besides the United States, several other countries are also asking their citizens to leave Ukraine immediately. On Friday, a British diplomat told CNN that the British Embassy in Kyiv is “temporarily removing all non-essential staff and dependents” and “a core team will remain to continue essential tasks.”

On LA’s Usually Bustling West Side, The Film’s Bees Are Silent – Deadline