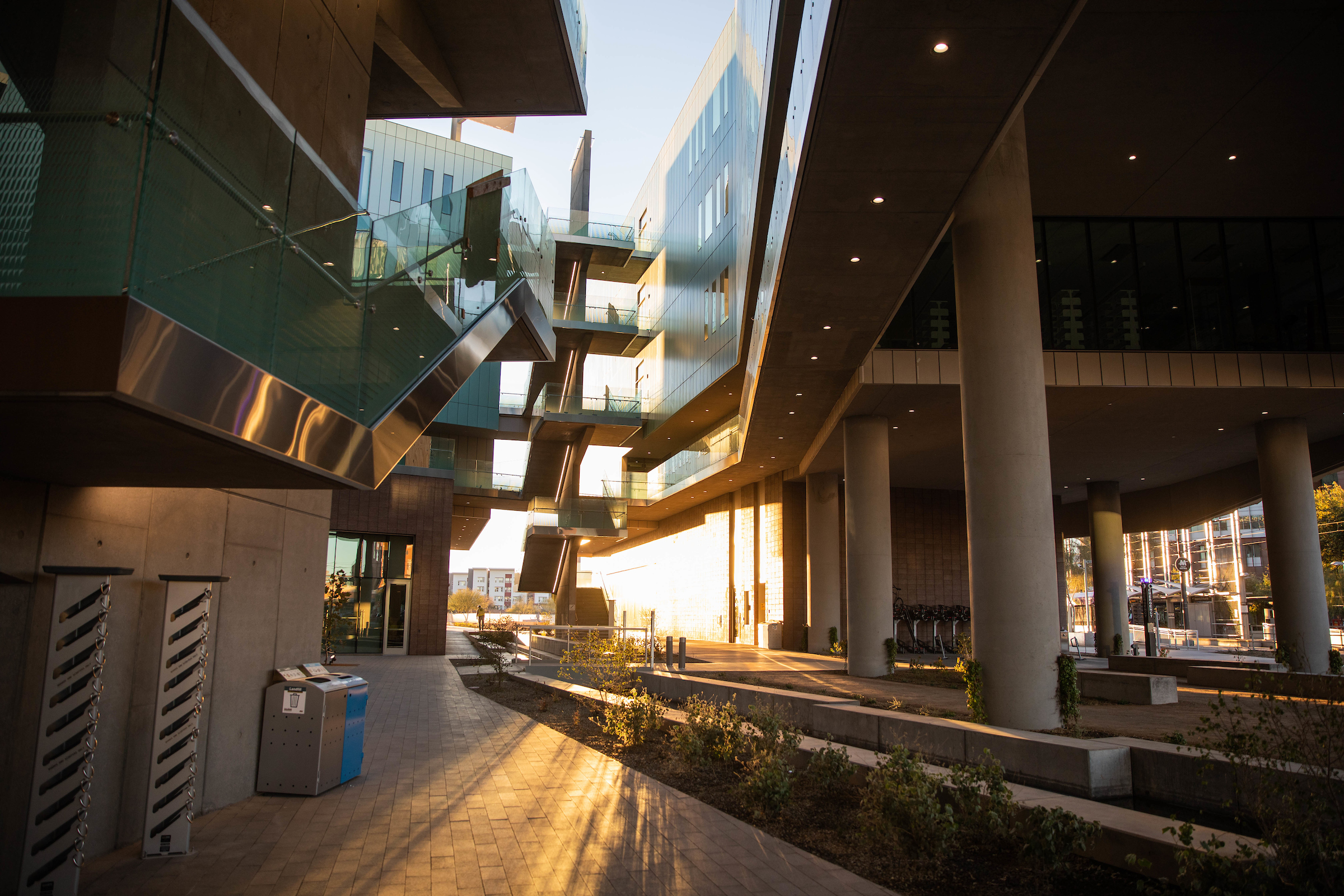 ISTB7: A building linking our ancient past to our thriving future

Heritage, thermodynamics and respite are part of the history of ASU’s newest building around the corner from the Tempe campus

The desert is a place that tells stories. Petroglyphs. Tire tracks. Paw prints. The dried parchment of a restored snakeskin.

Who was here. What did they do. Where they went.

And so it is with the newest addition to Arizona State University’s Tempe campus.

Interdisciplinary Science and Technology Building 7 is a desert building, not a building in the desert.

Although he was not baptized until April, he was born with many stories to tell.

The idea, as envisioned by university president Michael Crow, was to create a lounge for the university, a place that is a nexus for all research at the institution.

“Every move that has been made has been made to support this mission to create a very holistic, comfortable and sustainable project,” said architect Rachel Green Rasmussen.

The $192 million building includes 70,000 square feet of laboratory space. There’s a 26% reduction in global warming potential, water-based climate control to reduce energy consumption, and the ability to capture 100% of the rain that falls on it and direct it to the landscape and aquifer recharge.

The interior is full of surprises. There’s a rest room up a stairwell, which looks shabby, but it’s a lovely, unusual space.

The site: The history and importance of water in the desert

An irrigation canal — a long stretch of this land — crosses the courtyard of the new ISTB7 building. A number of historical elements have been incorporated into the design of the building. Photo by Deanna Dent/ASU News

The site has always been a crossroads. Today it is one of the busiest intersections in the state.

A thousand years ago, the site was used to process food, an archaeological study has revealed. The Akimel O’Odham and the Piipaash brought foods like mesquite pods here. There was a footpath and later a stagecoach road. The first transcontinental highway – from Savannah, Georgia, to San Diego – passed through here. (A vestige has been preserved.) The waters of the Kirkland-McKinney GapWhat remains of the Kirkland-McKinney are a few small open ditch segments along Eighth Street and University Drive in Tempe. He is sometimes also referred to as Hayden Ditch. powered the Hayden Flour Mill.

The Kirkland-McKinney was among the first irrigation companies in the Tempe area, named after William H. Kirkland and James B. McKinney. With the help of Hispanic residents in the area, the Kirkland-McKinney branch is estimated to have been built between 1869 and 1870, making it the oldest waterworks existing and in use in the SRP system.

The Hayden branch was developed about a year later as part of Charles Trumbull Hayden’s vision to create a water powered flour mill. This branch continued to serve Tempe until urbanization reduced the size of the branch and most of it was eventually piped underground.

Water from this ditch system also helped support a thriving Spanish-speaking community of prominent families, such as the Sotelo family. The area was named after the family, known as the Sotelo addition, and supported agriculture until the area began to urbanize around mid-century.

It is important to note that this canal and many others have deeper roads, and some date from before Europeans settled the valley, built by the ancestors of modern Akimel O’odham, who today are part of the Gila River and the Salt Pima-Maricopa River. Indian communities.

The incorporation of the moat’s ISTB7 into the building’s design is unique, and SRP is working with ASU, the Bureau of Reclamation, and Native American tribes to develop interpretive signage that tells the story of these canals. .

Another piece of history on the land is a railroad that connected Tempe to the great Union Pacific rail network and the rest of the Southwest. Aspects of each of these historic elements have been preserved as part of the new structure.

“We wanted to be able to preserve and tell that story,” said Tom Reilly, architect at Architekton, one of the two companies that designed the building. “So less than 50% of the building touches the ground. … It creates this process.

The construction site: the challenges

The ISTB7, introduced Feb. 3, sits at one of the busiest intersections in the state. Photo by Denna Dent/ASU News

There is a 28 foot drop from the intersection of University Drive and Rural Road to the top of the site. A working Salt River Project ditch and light rail pass through the site. And, as mentioned, it sits at one of the busiest intersections in the state.

It was perhaps the most complex place to build anything in Arizona.

“All of that stuff just to break new ground,” Diaz said.

“I’m the oldest guy on the team, and I can tell you it was the toughest site I’ve ever worked on. But the other side of that is that there were some hidden gems that I haven’t seen on any other site either,” said architect Tom Reilly. “There were several times during the process where it looked like we weren’t going to be able to finish the building on this site. And inevitably, people came together and everyone wanted to do the right thing. They figured out how to do it.

“So it was a huge team effort by ASU, all the builders, all the designers, the SRP, the Bureau of Land Management, the City of Tempe. it happened despite the obstacles.

The architects for the project were Tempe-based Architekton and New York-based Grimshaw Architects.

The first step was to educate the East Coast contingent on all things Arizona.

“We threw New Yorkers into every aspect of the desert,” said Rasmussen, architect at Architekton. “We took walks along the canals. We went for a hike in the desert. Lots of stuff to really get them to understand plant matter and the kind of beauty that I think we’ve all recognized that really seeps into your soul here about desert life.

Eric Johnson, partner at Grimshaw, said: “With Architekton, you taught us a lot about shading and the relevance of materiality in Arizona.”

The “canyon slot” on the east side of the building alludes to ISTB7’s geode inspiration – a harsh exterior with a sparkling interior. Photo by Charlie Leight/ASU News

The concept behind the building is a geode. The exterior is hard and crisp, but in the inner courtyard there is an abundance of light, sparkling glass.

The interior is also considered a riparian zone, with water flowing through and cool blue walls inspired by Havasu Falls in the Grand Canyon.

“You can get a glimpse of this idea by walking around the building,” Johnson said. “There’s the slot canyon to the east where you can see in this blue and green material with all of its highlights that we’ve provided.”

The building is clad in a shell of fiberglass reinforced concrete panels. (Concrete was invented at ASU by Barzin Mobasher, professor of civil and environmental engineering at the School of Sustainable Engineering and the Built Environment.) It absorbs and stores less heat.

“How do you create a skin that doesn’t retain that heat? It slows down heat transfer in the building?” said university architect Ed Soltero. “We delayed that, so the mechanical systems were completely reduced and that we don’t expend a lot of energy.”