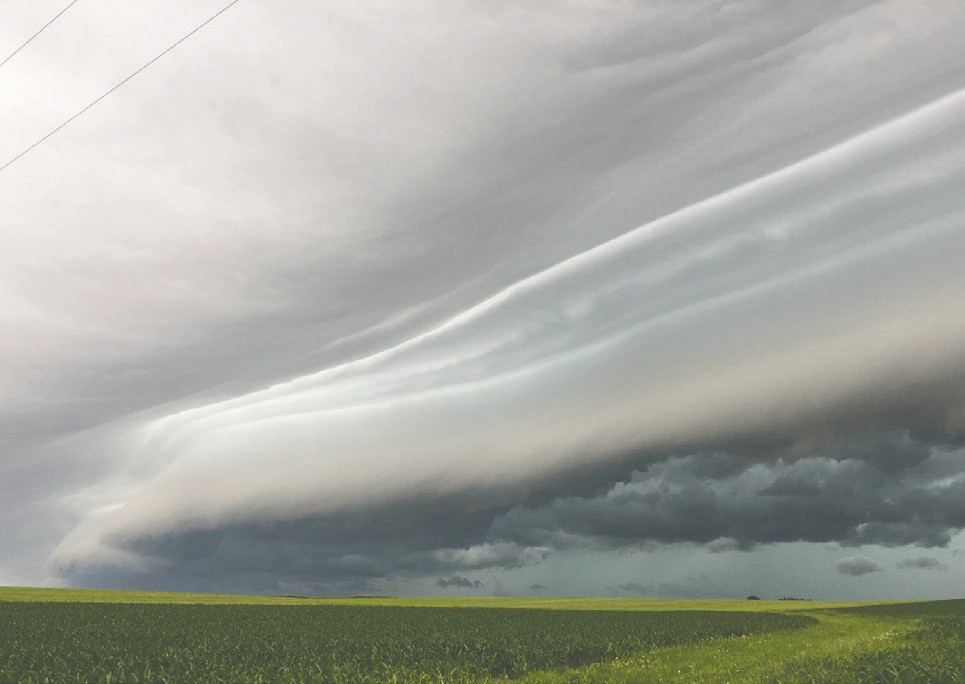 EMBARRASSED—Suzanne Winckler got out of her car at the end of a dead-end gravel road and looked up.

There was a mass of opaque, milky-white altostratus in the distance. Crisscrossing the sky above our heads were undulating lines of cirrus homogenitus, clouds seeded by passing planes. Winckler would be back at sunset to see what else the sky had to offer an avid cloud watcher.

“Sometimes it’s dramatic or exciting, but most of the time watching the clouds is soothing,” Winckler said. “It reminds you that nothing is permanent, and it’s a way of accepting the impermanence of life.”

It is also one of the bright spots of his day. And, as part of a small team of writers from around the world, Winckler helps bring the beauty of clouds to a global audience through the Cloud Appreciation Society’s Cloud of the Day.

Winckler helps marry engaging captions, descriptions, and even poetry and lyrics to cloud imagery submitted by enthusiasts around the world. These daily doses of weather are available on the Cloud Appreciation Society website, and they land in members’ inboxes every day.

Asperitas clouds spotted near Winckler’s home this summer. Cloud formation is relatively rare and resembles rolling waves. Wave structures form at the bottom of the cloud.

The cloud editorial team could explain how a rolling cloud forms, resembling a thick snake lying on the horizon. They might share a photo of a cloud from outer space or a view of stratus fractus clouds painted on a scroll by a 10th-century Chinese artist. Or they could pair a photo of dreamy twilight rays with Led Zeppelin lyrics.

Gavin Pretor-Pinney founded the Cloud Appreciation Society in the UK 17 years ago. Since then, he shares his joy of raising his eyes to the sky. The Clouds of the Day messages are all about that, he said.

“It’s a pat on the shoulder, reminding you to look up,” Pretor-Pinney said in an interview from his UK office. “Not looking down all the time, on our phones, on the floor. Looking up at the sky is a counterweight to that.

That message seems to resonate in these turbulent times, Pretor-Pinney said.

“Based on the feedback we’re getting, it’s been a source of comfort,” he said. “Not just with Covid, but with the divisive nature of the modern world.

Much of the digital world is based on division and opposition. But people have generally warmed to the fact that the sky is something that is shared…. People realize that they share the same view of the sky.

Winckler transitioned from a casual cloud appreciator to a more dedicated cloud watcher after hearing about the Cloud Appreciation Society in 2016. Almost immediately, she saw her first spectacular, short-lived cloud – a horseshoe vortex , which looks like an inverted “Me”. They usually hang together for less than a minute, but Winkler was able to snap a photo and send it through the company’s app. It was selected as cloud of the day and Winckler was hooked. She has been writing for the society for about three years.

Mike Nordin of Duluth has been a member of the Cloud Appreciation Society for over a decade.

“Clouds make life more interesting,” said Nordin, who recently retired and is an amateur photographer. Nordin recently started a cloud sensing group for anyone in northeast Minnesota interested in talking and sharing cloud photos. Nordin grew up near Hermantown and spent a lot of time outdoors under open skies.

“You could see a big area, you could watch the weather coming into Duluth,” he said. He loves spotting the wispy “mare’s tails”, which are tall cirrus clouds with a twist at their tip. On a trip to Bandeleir National Monument in New Mexico, Nordin was more interested in the masses of feathery cirrus clouds that filled the dark blue sky than in the site’s historic cliff dwellings.

“I’m still looking at those photos of the sky,” Nordin said.

Looking up all the time is not a natural act, Pretor-Pinney said. “We’re wired to look down, to look for threats, to look for our social interactions,” he said.

But looking up can offer an excuse – if necessary – to spend some time daydreaming. You can let your mind wander as you gaze at delicate cirrus clouds six miles up, or meditate on heavy, low cumulonimbus clouds filled with consequence.

“Something can be aimless without being useless,” Pretor-Pinney said. The cloud sightings are also a reminder that humans are merely observers of the “chaotic and ungovernable” whims of the weather, he said. Pretor-Pinney has written several books on cloud watching and, in 2013, gave a TED talk on the art of lazily staring at the sky.

“You are not the center of the universe,” Pretor-Pinney said is part of the call for him. “The sky is the part of nature that is least under our control; this is a good thing.”

The Cloud Appreciation Society has developed an educational cloud kit that Pretor-Pinney calls “a survival kit for the imagination.” It will send the kits free of charge to any schools or homeschooling families that request them, as part of the company’s outreach efforts. The company is also launching the first International Cloud Appreciation Day in September. They plan to create a “Memory Cloud Atlas” which will go live on Friday, September 16.

People all over the world will be able to post photos of their piece of the sky, as well as their thoughts and on the clouds. According to the company, the Cloud Atlas “will build as a collective, free and inclusive view of our atmosphere in a single day.” “Visitors will be able to watch images, words and voice recordings of other people’s sky views accumulate on the Memory Cloud Atlas.”

And Winckler and the small team of writers are here to teach you what you might see out the window.

To learn more about the Cloud Appreciation Society, visit their website at www.cloudappreciationsociety.org.

Janna Goerdt lives and manages a farm near Embarrass. When she’s not working on the farm, caring for her twins, or writing, she enjoys prowling the new non-fiction shelf at the Virginia Public Library. She can be reached at janna@htfnews.us.