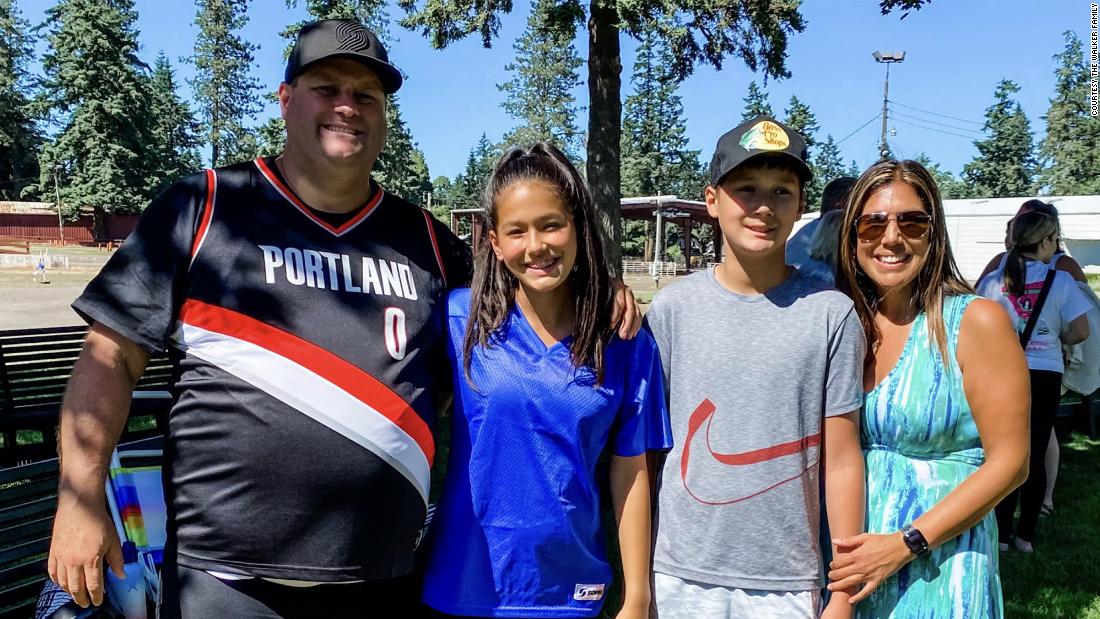 On the first Christmas since their father died from Covid-19, a brother and sister face grief and share ‘some things we wish you were here for’

Four months ago, with little warning, Alec and Gabriella’s father Billy Walker – who rarely caught a cold – lay in a hospital in Portland, Oregon.

Then he had a massive stroke that crippled his left side. She was induced by Covid-19, doctors told his ex-wife, Sylvia.

His lungs were full of the virus. He needed emergency brain surgery. He got it. But his body couldn’t take it.

Sylvia knew that Billy, barely 44, was dying. So she gave the choice to their children – Alec, 12, and Gabriella, 14. They wanted to be with him – even though they couldn’t be in the room.

The breathing tubes had been removed. Beside his bed, Alec’s mother and Gabriella put the phone on speaker. The children were listening on the other end of the phone.

Her words were difficult to understand because of the stroke, said Sylvia Walker. But he recognized his children’s voices and managed to say the words “I love you” over and over again.

“Sit there and listen to him … the growls daddy was making,” Gabriella recalls. “When he told me he loved me … When he called me ‘Peanut’ …”

Before long there was no sound.

Into this void has seeped a heartbreak that has touched the loved ones of more than 800,000 coronavirus victims in the United States, including a generation of children who have lost a parent or grandparent to the pandemic.

Months later, on the eve of their first Christmas without their father, Alec and Gabriella continue to find ways to overcome their pain, including talking to other children who are honestly facing death, aided by adults determined to help them. to support.

The effort may seem different to each of the siblings and can last a very, very long time. But it helps them move forward, even in a world with an empty chair at the table, a missing voice as the presents are opened, a void they didn’t expect so early in their young lives.

Sylvia and Billy Walker have always been best friends, even after their marriage didn’t work out. They spoke daily. We have been to family events together. Dinners. All the things best friends do. Their children had their father and mother fully involved in their lives. And then he was gone.

Children, of course, neither. No one they knew had it. None of their relatives had died, let alone one of the most important people in their lives.

Billy Walker hadn’t really told them how sick he was, his ex-wife said. He thought he had a bad cold for a few days. He has not been vaccinated.

â€œThere was no good reason Billy didn’t get the shot. He just thought he was strong and healthy. I guess part of it didn’t like being shot. say what to do, “Walker said.

And then suddenly he was too sick to make decisions on his own.

â€œWe had, like, that friendship and so many memories of it. I didn’t want to spoil it by seeing him in such a bad place,â€ Alec said. “We liked to joke. And laugh. And do things together.”

Gabriella wanted to remember her father’s hilarious quirks. She loved to dance; he was terrible at that. But they were dancing around the house and she teased him about her awkward movements.

It all ended around 7:15 p.m. on August 29. He passed away the night before Alec and Gabriella’s first day of school.

“They got up and went to school: Alec in middle school, Gabriella in high school,” Walker recalls, crying. “They did it because they knew it was what their father wanted.”

“Nobody knew what to tell me”

But at school, Gabriella found herself in a difficult situation.

â€œWhen I got there, what I really needed was to feel normal. But no one knew what to tell me,â€ she said. “I was suddenly in my own bubble, and it got worse. I felt isolated.”

Witnessing her father’s death over the phone turned out to be a blessing with bitter tentacles. While they had been able to make him hear how much he was loved, those last moments began to replay in Gabriella’s mind like a spinning hamster wheel.

One question in particular from her peers made it difficult for the 14-year-old to function.

“People keep asking you if you’re okay. It’s a no. It’s always a no. My dad is gone. Forever,” she said.

Alec is the shyest one, his mother says. He doesn’t like talking about personal things to strangers.

His friends treated him normally at school, and that was a relief, he said. But he knew that was in part because many didn’t know his father had just passed away. He also had another tampon against the more acute shock.

â€œThe sport has helped me. It just takes my mind off my head,â€ said Alec, who plays basketball, football and lacrosse. “I can forget about school. I can forget what happened. I can just do that.”

Walker does not hide his grief. And she wants her children to be able to express their pain the way they need to. No secrets. No shame in times of deep sadness. No judgment in the time it takes for them to be OK again.

Soon Alec and Gabriella decided they needed to talk about their father, how they were feeling, how to get out of it.

Kids are resilient, but they need a guide

Walker found a place where they could express their pain and learn from other children trying to find a way through grief. The Dougy Center, a Portland nonprofit, was touted as the first such center in the United States to offer peer support groups for children and families.

It is named after a little boy named Dougy Turno. Faced with terminal brain cancer, Dougy would tell other terminally ill children at the hospital, â€œI’m going to die. said Brennan Wood, executive director of the center.

Children are curious. They are honest. And they have questions about grief that they need answered, she said.

“I’ve never heard a child say, ‘I’m glad you lied to me about death. I’m glad you kept some information from me. I’m glad you took me out of the conversation, “said Wood.” Kids are resilient, but they need a guide to help them be resilient. It doesn’t happen in a vacuum. “

For the Walkers, the center has been a godsend.

â€œIf you’ve never experienced it, you can never understand it. Peer and professional counseling has been and still is incredibly important to our path to recovery,â€ Walker said. “And there is no time limit on how long we can use their services.”

“Things we want you to be here for”

The Walker children began to express their grief in different ways. They want their father to always be a part of their life, so every night before bed they talk to him and tell him about their day as part of their prayers, their mother said.

Gabriella, her brother and their mother recently wrote a letter to Billy, and Gabriella made a video with those words, along with photos and videos of the good times. It started: “You’ve been gone 113 days. Here are a few things we want you to be here for.”

It included references to the four-wheelers they’d bought together so they could zoom in on nature, the good jokes Billy loved to tell, the restaurant where they used to be the only ones laughing their asses off while the people around them ate in silence or looked at their phones.

It’s the simple moments that they miss the most. The hug. Smile. The terrible dance that made them laugh.

As Christmas approaches, the Walkers have decided they need to shatter old traditions. They couldn’t stand the empty chair, the mute voice, the missing piece of their family puzzle.

â€œWe know we have a lifetime to go without him, like every Christmas. And it hurts so much,â€ Gabriella said.

Walker made a new plan this Christmas: “We will be at Disneyland. We thought we would try to go to the ‘happiest place on earth’ to try and ease our grief.”

That day and every day, she gives her children this advice which, she hopes, could also comfort other people facing similar grief: â€œI tell my children, ‘We are not. ‘Okay, and that’s okay, but you’ll be fine. “”

Jeremy Harlan of CNN contributed to this report.