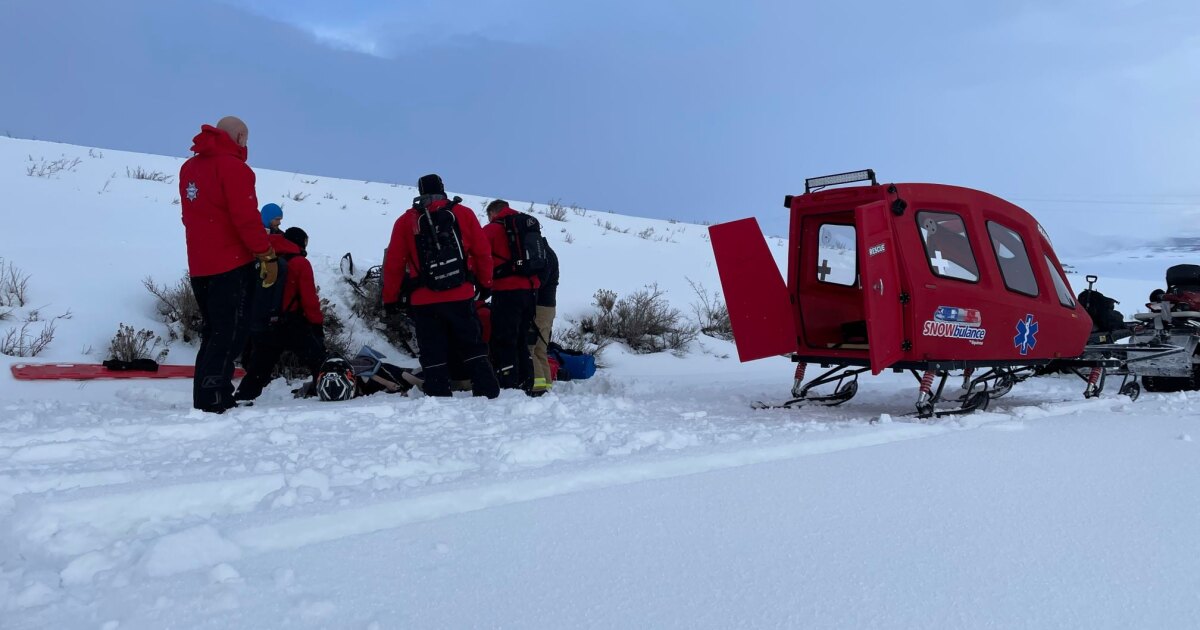 On Saturday, a man in his 20s broke his femur in a snowmobile accident in Horse Creek Canyon near Strawberry Reservoir. He was riding in low light conditions, hit a hole at high speed and crashed into a pile of snow, throwing his body against the front of the snowmobile.

Wasatch County Search and Rescue Captain Kam Kohler said the type of accident he’s had is very common for snowmobilers and reminded people to stay in control, especially in low visibility.

Rescuers transported the patient on a snowbulance, which is a sled with room for someone to lie down and a paramedic to accompany them.

Kohler said that’s how they get people off the trails or backcountry only when the ride isn’t too bumpy to keep a patient healthy. The other main option is a helicopter.

“We put a patient on a backboard, strap them in, put them in the snowbulance,” Kohler said. “It’s on a pretty good suspension. It’s not a fun ride, because you have a broken bone, but it’s definitely better than being exposed to the weather all the way.

After Search and Rescue received the call around 3:30 p.m., the crew arrived about an hour later. Wasatch County Fire also responded. The man was taken to hospital for treatment.

Two days earlier, a team responded to a call about a 30-year-old man who got stuck after driving a truck down a snowmobile trail. He got stuck near Highway 35 above Woodland, which is just south of Francis and inside the Summit County lines. It was about a mile and a half down a paved road.

While trying to drive away, the man broke the truck’s transmission and prevented it from rolling in reverse. To make matters worse, he had no cell phone service.

By the time search and rescue arrived, the man was gone. He left the site with snowshoers who passed by his car. He told the snowshoers he had spent the previous night in the truck.

Kohler said driving a car on closed roads is not only illegal but dangerous for drivers and people who use snowmobile trails. The cars dig holes and divots in the tracks. When they freeze, the terrain becomes more dangerous for snowmobilers.

Additionally, the county does not allow search and rescue to recover vehicles for liability reasons unless it is necessary to rescue someone.

“People just make stupid choices, and they trash the groomed trail, and then they expect Search and Rescue to come and tow them,” Kohler said. “We’re just saying, ‘We’d like to tow you, but we can’t. I can’t even hook a chain to your truck and try to drag you out.

Kohler said the truck was likely still on the trail.

According to Kohler, cases of people getting stuck on snowmobile trails occur about five times a year.