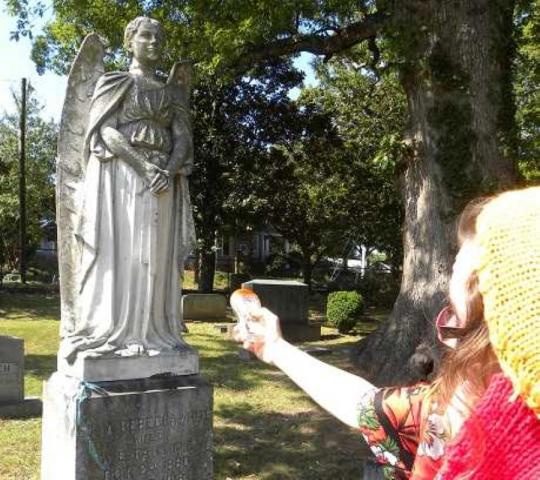 From the mysterious Gimghoul Castle in Chapel Hill to the curious Revolving Angel of Oakwood Cemetery, the Triangle region is full of weird urban legends to be told around Halloween.

Here’s a look at some of the most popular – and spooky – haunted places around Raleigh, Durham, and Chapel Hill – which you can visit or drive past if you want to scare yourself!

The oldest marked grave in Wake County is located behind Spring Hill House on today’s Centennial Campus. The grave, belonging to Theophilus Hunter, Sr., dates back to 1798.

Aside from its marked terrain, historians believe there are most likely several other unmarked graves on the property. Huge research has been done on people who could also be buried nearby, with up to 26 people likely to be buried there.

When he died, he left his land to his son, who built Spring Hill House in 1820. In the early 1900s, Dorothea Dix Hospital occupied the property.

According to urban legends, something inside the house keeps triggering motion detectors, even late at night when no one is inside. Some security guards have claimed to come back to the house every time the alarms go off – only to find the house empty and grave.

Specifically, the motion sensor on the stairwell seems to be triggered more often – almost as if someone is trying to go down the stairs over and over again. Some versions of the legend claim that it is the ghost of Theophilus himself, making visits to and from the house from his nearby tomb. 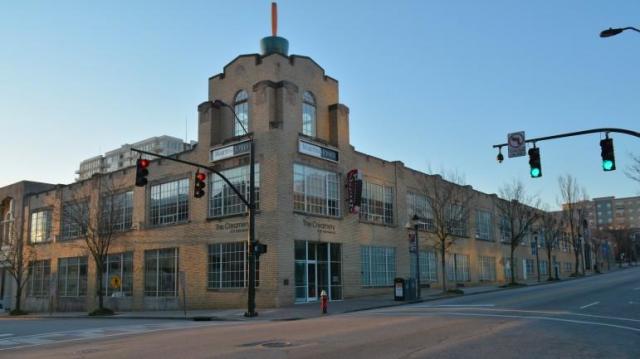 2. The Pine State Creamery: Story of a Raleigh Serial Killer

As surprising as it may sound, Raleigh once had a serial killer. In the 1990s, a series of murders left six people dead in a downtown area described as “plagued by prostitution and drug trafficking”.

Within about a year, the bodies of six murdered women had been found in the area. A 35-year-old homeless man named John Williams, Jr. was ultimately charged with the murders.

For years, a restaurant known as Dos Taquitos Xoco in the Pine State Creamery claimed to be haunted by the ghost of one of the women, who employees said died in the alleyway. The company even had a sign on its door warning that customers had spoken of paranormal experiences.

Bosses and employees claimed to hear their names whispered by a disembodied voice. At night, employees closing said the glasses moved on their own, sometimes even falling and smashing to the floor. Some employees even said the lights went out while they were alone.

Dos Taquitos is no longer located at the Pine State Creamery at 410 Glenwood Avenue; however, The Milk Bar now has this address – aside from the question: Did the spooky events continue after the new business moved in? 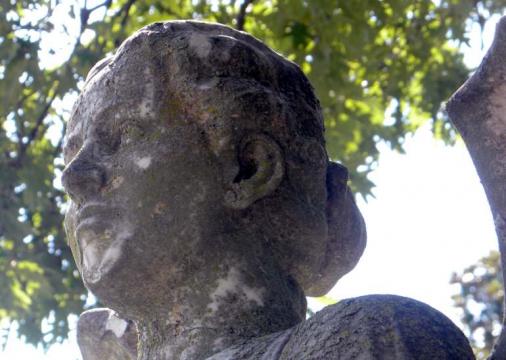 Etta Ratcliffe’s beautiful gravestone is the statue of an angel who is said to have shared her face.

Today she is known as the “Spinning Angel of Oakwood” or “Ratcliffe Angel”. At night, its large shadow and angelic figure peering through the trees can look strange when seen from the dark pavement.

The legend probably started because his statue looks so realistic and can be easily seen from the main road – the perfect target for an urban legend.

Some locals claim his lifelike eyes follow them as they walk past. Others claim that his whole head spins about 12 times at midnight on Halloween day.

Whether the legend is true or not, some members of his family have shared that they are not upset that their ancestor is part of an urban legend. On the contrary, according to an interview on a local website, they said they were happy that their family was part of such a popular piece of local lore. 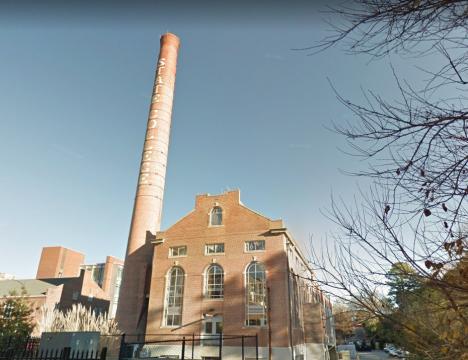 Built in 1925, the historic Yarborough Smokestack is a common sight on the North Carolina State Campus – and although it was built to help heat buildings, many students claim to be cold as they pass by. before.

According to legend, if you look up the fireplace at night, you can sometimes see the ghost of a student, suspended in the air, who died there tragically many years ago. The ghost doesn’t seem to be doing anything; but the hanging shadow creates a strange apparition for the students who pass by after nocturnal study sessions.

Some students say the ghost is that of a young man who climbed up there heartbroken after losing the woman he loved, and leaped from the top to die. Others say a student worked in the adjoining steam plant and died in an accident.

According to an interview in The Technician, the legend may actually have its roots in a real tragedy which occurred in 1989, when “two students found an open door at the base of the fireplace and climbed near the top of the fireplace. ‘ladder inside, where one tragically fell to their death. “

If you want to be sure, walk or walk past the fireplace late at night and see for yourself. 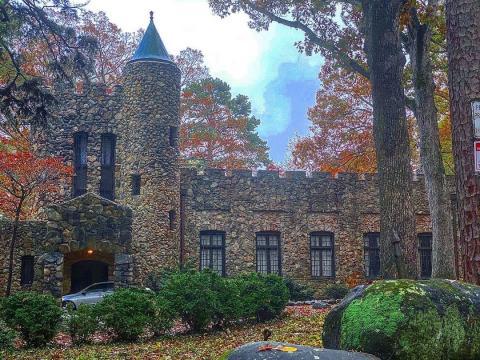 Built in the 1920s, the legends of the mysterious Gimghoul Castle circulate every Halloween. It’s hard to imagine a castle in the middle of Chapel Hill, but this old castle has been there for decades, just east of the UNC campus.

Much of the castle’s actual history is muddled with the legends, ghost stories, and the secret society that meet inside – it can be hard to tell which parts of the castle’s history are real and which are myths.

Caroline’s students tell the story of Peter Dromgoole, a school legend about a student who enrolled in 1833. According to the old story, he fell in love with a woman called Miss Fanny and was forced to to duel for his affection.

Unfortunately, according to the tragic tale, he lost the duel and died on a rock, permanently staining it with his blood. His body was hidden under the rock in a shallow grave.

It’s unclear how much of the story is a myth and how much is based on actual information. However, popular history inspired UNC students to create a secret society called the Order of Gimghoul.

It is rare to receive an invitation to see the interior of the castle; However, you can spot it off Gimghoul Road in Chapel Hill.

6. Cabelands Cemetery: Abandoned cemetery in the middle of the woods in Durham

Hidden in the woods around the Eno are the remains of farms, mills, farms and even cemeteries of families who plowed this land in the 1700s and 1800s.

Near the Cabelands section of the Eno Trails, hikers may spot a ruined mill with iconic arcades or the shattered headstones and sunken graves of the Cabe Family Cemetery.

Only 12 graves have official markers; however, historians say the burial site contains 51 graves. Some tombs are only noticeable for the way the ground sinks almost a foot deep, forming coffin-sized divots in the earth.

In this section of the park, known as the Cabelands, many hikers have reported hearing whispered voices, screams coming from the woods – and even seeing people in the shade hissing through the trees. 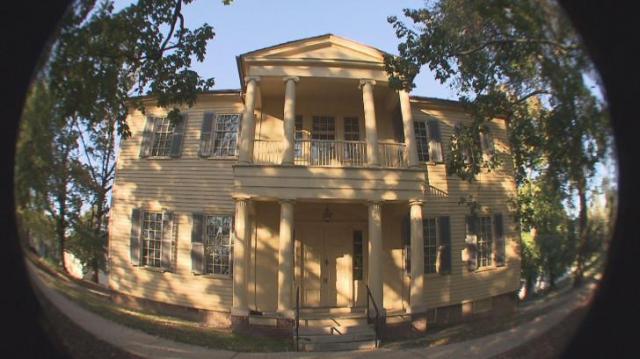 7. Mordecai House: Ghostly apparition on the balcony of one of Raleigh’s oldest houses

Older than Raleigh itself, Mordecai House is the oldest house in town still on its original foundations.

During the day, the historic house offers public tours. But at night, some employees claimed to have had supernatural experiences.

Visitors and workers report seeing a woman in a 19th century dress wandering the halls of the house. Rumors also say that she can be seen, sometimes, standing on the balcony if you are passing late at night.

Other visitors and night workers have heard the house piano play by itself, occasionally reporting seeing a gray, mist-like substance hovering over the keys.

Many believe that there are two ghosts in the house – Margaret Mordecai and Mary Willis Mordecai Turk.

The legend of the house is so popular that it was featured on national television, visited by the ghost hunters of SyFy. There’s even a dedicated team of paranormal investigators, known as the Ghost Guild, who have partnered up with Mordecai Historical Park.

Have we missed any good ones?

If you have a haunted story around the Triangle that you think we should explore, email WRAL Hidden Historian hleah@wral.com.