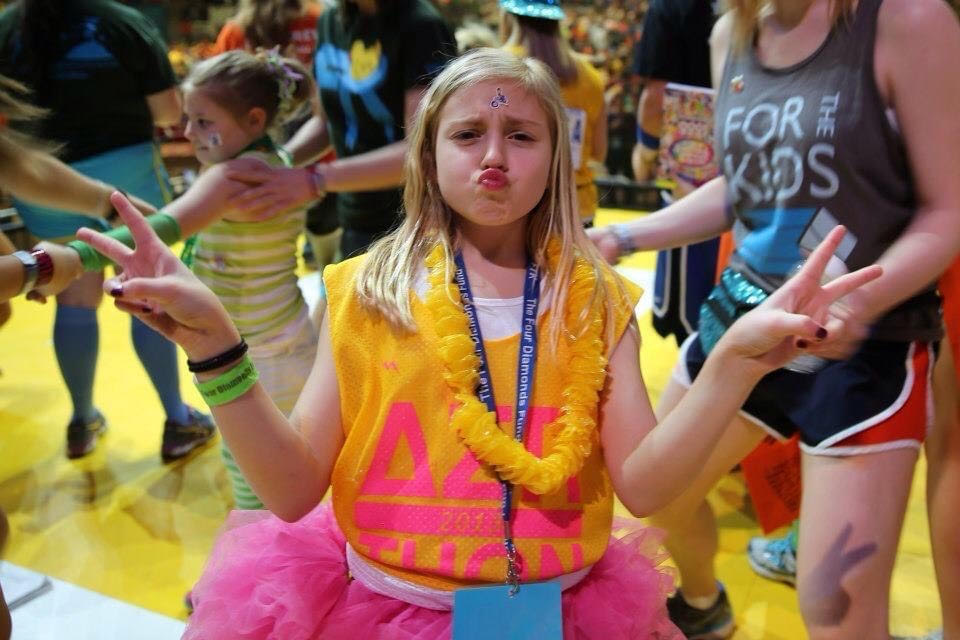 Sydney Bush knew she wanted to be a THON dancer since she was 3 years old. Although she never actively thought about it growing up, she always felt it in her heart.

When she was only 2 years old, Bush was diagnosed with a brain tumor. Naturally, she jumped at the chance to get involved with THON, especially from a young age.

Bush’s first THON was in 2006 when two freelance dancers danced in his honor. The following year, she partnered with Delta Sigma Pi, a business fraternity, and every year since then, she’s made the trip to the Bryce Jordan Center to reunite with all of her dancers.

“The impact Four Diamonds and THON have had on me personally has been tremendous,” Bush said. “I don’t think I would be the person I am today without THON and Four Diamonds.”

These days, Bush is a freshman majoring in human development and family studies at Penn State Altoona with plans to transfer to University Park in the future. She always knew she would end up at Penn State because THON was such a big part of her life. All things considered, it was the only school she had applied to.

Bush’s relationship with his THON dancers runs deeper than one might imagine. In fact, she was invited to one of her first dancer weddings a few years ago. Former Delta Sigma Pi dancers from 10 years ago are even returning to the Bryce Jordan Center to see her dance this year.

She has been part of her THON organization for 16 years and every year she meets new people who are incredibly passionate about childhood cancer.

“They’re trying to understand what these families affected by childhood cancer are going through,” Bush said. “In the past, seeing this passion really motivated me. I want to give back. I want to help people as they have helped me.

When Bush was 5 and 6, she remembers talking to different captains and carrying their clipboards.

“I remember I was always asking them to play on their cell phones because obviously I was five years old and didn’t have a phone,” Bush said. “I was obsessed with them. Spending time with the captain of family relations was a huge part of when I was younger.

Now, Bush loves seeing the Captains of Family Relations interact with the younger ones because it takes her back to when she was in their shoes. She says these kids look up to captains so much.

“No child deserves to be touched by cancer,” Bush said. “To see them get to have the childhood they deserve, even for a weekend, is really moving, and I love it.”

Bush is special events captain for Altoona to benefit THON. She helps plan all of his events and comes up with fundraising ideas with his other three co-captains. Last year, she was part of the mini-THON Student Leadership Council through Four Diamonds. She helped with video production, attended meetings, etc.

Going to THON, she realized that one day she wanted to be captain – definitely at University Park.

This THON weekend, Bush is thrilled to have all of her friends, family and Four Diamonds folks back from her THON organization. Last year, she did not have this opportunity because THON 2021 was virtual.

“People in high school called me the Mini-THON girl. Now I feel like ‘THON’ at Penn State because walking around campus wearing this mask. Nobody else is wearing this,” Bush said, pointing to his gold-ribbon mask.

“THON is everything to me,” Bush continued. “It’s passionate. It is hope. These are the Four Diamonds, in general. That’s literally it for me. THON is my life. It’s who I am.

Colleen is a junior biology student from York, Pennsylvania, and is one of Onward State’s associate editors. She abuses the ~tilde~ and aspires to be none other than the great Guy Fieri. You can find Colleen filling up her gas tank at Rutter’s, Pennsylvania’s ~superior~ gas station. Please direct any questions or concerns to [email protected]

Ukrainian crisis: NATO moves its personnel out of Kiev; Blinken denounces the demands of the Kremlin – live | world news

Marc Brown on Arthur’s Ending and His Favorite Fan Theories