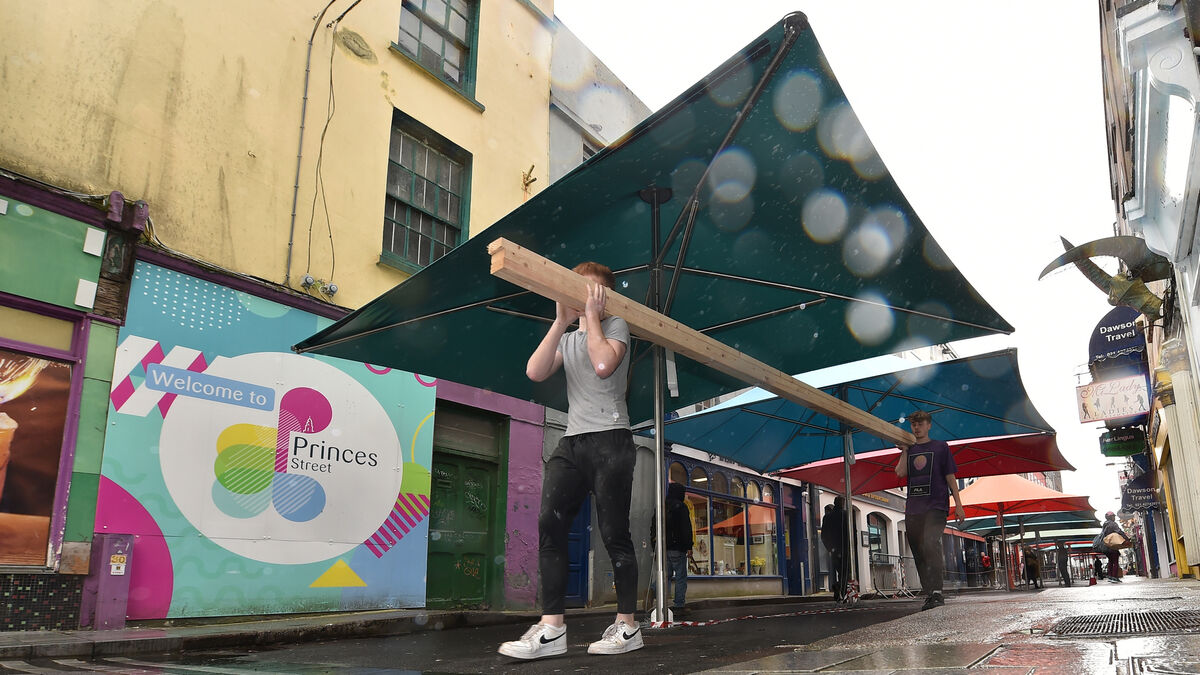 IIt’s been so long since I’ve been in the office that I’m going to have to rely on memory, but in this case the memory is pretty crisp.

In our office there is a 1954 photo of little Cork children enjoying ice cream in the sun. The painting is enlarged and occupies most of a wall, which makes the detail clear: the curve of the mirror, the seriousness of the children’s faces.

And their clothes. Although warm enough for ice cream – warm enough for short pants, in fact – one of the little boys has a woolen sweater that is zipped almost up to the neck, with a shirt underneath. And overalls on it. The little girl next to him has a full buttoned waistcoat.

Lest someone think I have a problem with our ancestors, you just have to walk around the city center every day when the sun is shining to see similar schizophrenia when the temperature climbs around 20 degrees.

Waterproof raincoats and light T-shirts are sometimes worn at the same time.

Our notion of what is suitable for heat is elastic, to say the least. The less we talk about the sock and sandal combination, a sure-fire ethnic marker of the Irish abroad, the better.

Yet I have serious reasons to heat the city.

While the coronavirus has done a good job of distracting us from other headaches, the issue of climate change remains in the background, and somewhere like Cork – low elevation, prone to flooding – needs to keep an eye on that many. other cities.

The need to cool things down is clearly more pressing in other jurisdictions.

Some figures suggest that more people die in the United States from heat stroke and other heat-related problems than from any other natural disaster, for example.

Closer to home, the heat waves in France have also claimed lives as vulnerable people find the conditions really unbearable, especially in the cities.

By comparison, our occasional growls when the mercury rises above twenty degrees seems a little theatrical.

But rising temperatures are a real problem. If there is a silver lining to the ever-increasing heat in these other countries, perhaps it is that it is forcing authorities to recognize a problem and forcing them to deal with it.

In Ireland, the hot weather is more of an occasional and welcome treat than a brutal and punitive threat, but there are still lessons for us.

I saw recently, for example, that the Chicago city authorities were conducting a live experiment in this area – on its own roof.

Chicago’s city hall roof area is approximately 40,000 square feet, so the city authority has covered half of it with a garden, and the results have been striking.

On the one hand, the 20,000 plants on the roof can collect up to three-quarters of an inch of rain, relieving the strain on the city’s sewers; on the other hand, in a scorching summer in Chicago, the heat on the roof garden side can be almost half that of the uncovered half.

This has led many other buildings to create rooftop gardens in the Chicago urban area, with short- and medium-term benefits.

Could you see this happening on the roof of Cork Town Hall, with branches and tendrils rolling above the upper windows? I could.

Chicago follows a long established pattern of rising with gardens. In the 60s, Singapore realized that as a city it had to build upward, not outward, but made sure it didn’t happen at the expense of greenery. There are now 240 acres of “heavenly gardens” in the city, and its planning laws have enshrined the need for green spaces in law.

Although space is limited in Singapore, any new development must incorporate green spaces equivalent to the size of the original site. These green spaces can be at any level, and often come in the form of balcony gardens that are teeming with flowers and shrubs.

Rather than criticizing and complaining, some developers have embraced the requirement with open arms. The Oasia hotel in downtown Singapore is wrapped in a 200-meter trellis with plants and shrubs all over the place: the architect said the intention was to create “the notion of a huge tree in the city. And they certainly succeeded, providing vegetation that is eleven times larger than that of the building’s original footprint.

The benefits are varied. This amount of vegetation cools for the environment, generates oxygen in the atmosphere and, above all, is a calming sight in an urban environment.

Perhaps something for Cork City’s new tree officer to consider: If the Elysian or any of its new counterparts were covered in greenery, wouldn’t it have an impact when you look up of your coffee and you can see it in the distance?

Cork City’s Roads Division might want to take a look at what their Los Angeles counterparts are doing, come to think of it.

I was amazed to read in The Guardian that more than 10% of the land area within the limits of this city is made up of black asphalt, that is, its roads.

Since black asphalt absorbs up to 95% of solar energy, Los Angeles city officials decided to try covering at least some of the roads with a white sealant.

The good news is that it has reduced temperatures by up to five degrees Celsius in the surrounding area (the bad news is that the sealant costs around $ 34,000 per mile).

Go off the beaten track

This is reminiscent of the New York initiative of painting roofs reflective white rather than absorbent black, dramatically reducing carbon emissions while lowering temperatures as sunlight bounces off the roof instead of warming it, and the building it covers, like an oven.

Moreover, if you think that these initiatives are laudable but a little removed from your own daily experience, I direct you to the enterprising citizens of Basel in Switzerland.

Two years ago, temperatures were over 36 degrees (“soaring” is the usual description) and a few of them decided to take advantage of the Rhine, which runs through the center of the city, by swimming for to work.

Having spoken to Niall Kenny in the past about the need for a lido in Cork, I think this initiative would be welcome here, although I am not qualified to comment on how healthy it is or not to use the Rhine – a river ‘not for nervous swimmers’, as one travel article described it.

Your obvious question is one that struck me as well: someone may have Speedos under the wetsuit leaving the house, but where does the wetsuit go when you dive into the water? What about your phone? Your laptop? Your coffee loyalty card?

The Swiss have thought about it. All you need to do is buy a Wickelfisch, a waterproof fish-shaped bag and tow it with you. When you reach your destination, you jump in and collect your things.

Low emission, healthy, refreshing. The only change is that we’ll have to call ours a Shandon fish, obviously.

ID.me and the Child Tax Credit: How to Log In to the IRS Site and Unsubscribe from Monthly Payments