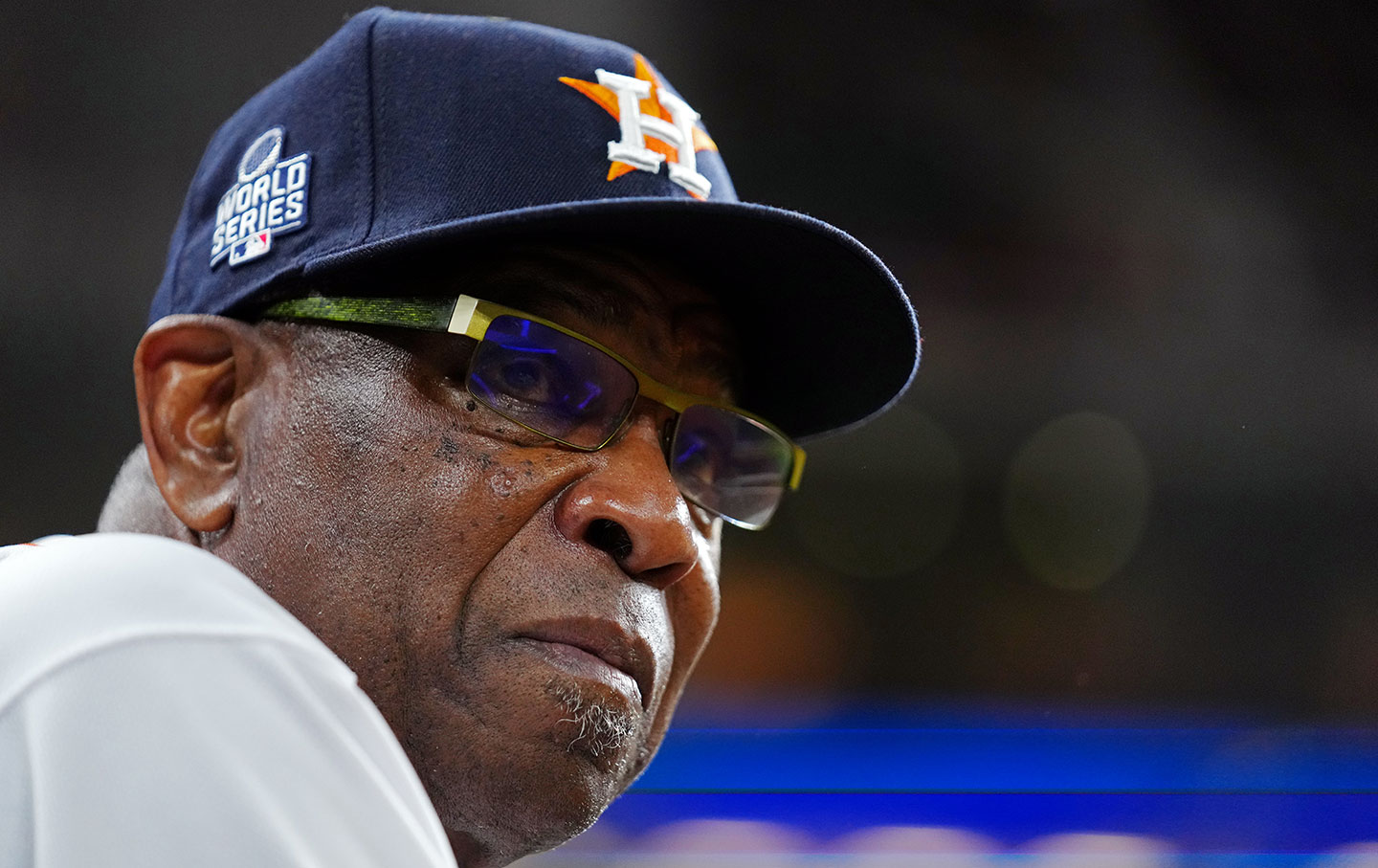 Thank you for signing up The nationthe weekly bulletin of.

Thank you for signing up. For more than The nation, see our latest issue.

The nation is supported by readers: add $ 10 or more to help us keep writing about the issues that matter.

Did you know you can support The nation while drinking wine?

You don’t have to worry about baseball to worry about Houston Astros manager Dusty Baker, whose team is heading into Game 6 of the World Series tomorrow. He’s a civil rights hero: a black Major League Baseball coach who has led five teams, in three decades, in both leagues, to the playoffs and / or the World Series.

And who, for almost all these years, had no contract waiting for him at the end of the season.

Is it, perhaps, about the race? I think so. It’s complicated, as race stories always are. It’s been a mix of culture shock and professional mismatch and changing front-office white dudes … and yet, when you see it over the course of nearly 30 years, it’s hard not to say the breed had something, perhaps, to do with it.

But also: the stories about racism all look alike, in a way, and Baker’s is so much more. Baker’s story sounds like meâ€¦ Miles Davis, Bruce Springsteen, Levon Helm, Angela Davis, Andre 3000 andâ€¦ so many more. I’ve covered it (I’m not a baseball writer, I’m a political and cultural writer, and he’s a political and cultural figure) for almost 30 years. Most of what I’ve written isn’t even online, it’s so long ago. But I reused it in a few pieces when I was at Salon, so I can share snippets.

I became a fan of the San Francisco Giants when they hired Baker almost 30 years ago. I can’t find the Chronicle of San Francisco stories that made me love it, online or offline. The play just let me know that he was a tough guy, an instigator, someone who would continue the legacy of Jackie Robinson and Henry Aaron (who was his baseball mentor) – and do so in his (at the time) Malcolm X glasses, listening to Outkast or Tupac or Van Morrison, every time I stopped at his desk. Which wasn’t often, but it was enough.

In his first season, in 1993, the Giants won 103 games, but the Atlanta Braves (yes, I get the echo, and it hurts. Get the tomahawk chop off, assholes) won 104. It was absolutely overwhelming for me. But Baker turned to local television, as a commentator on the postseason games, and I was like, â€œI’m moping as a fan, but he’s still okay? I have to know how he does this. So i interviewed him for a local magazine next spring.

He spoke openly about race and being the black manager of a multiracial team. It honestly changed my little white life. Although not at first. In person, he was bravado – race didn’t matter. â€œI didn’t even think about it. My attitude is that I have a job to do, and it’s not about black and white. I asked him how the players tend to split up, by race, in the clubhouse. â€œIt’s in all jobs. You spend time with the people you have the most in common with. I dropped. Then he called me on the phone a few weeks later. He spoke about his struggles for the South in the minor leagues – and I’m not even going to share it here, as it always pains me to read – and also the clubhouse’s racial politics.

â€œOf course I would love to see more mixing, but there are reasons why there isn’t. Whites are not used to thinking about their race; Black people have to think about it all the time. Guys will say, ‘Bake, man, I wish you were with me last night; I was the only white in this club. And I’ll say, “Now you know what that does. But on the pitch, we are a team. In this clubhouse, we are together.

It’s not that I never thought about it, or that none of my black friends shared this feeling with me. It was just that it was unexpected to hear it from a major league sports figure no matter what the sport. Or a major industry CEO. A person of full age, in any field. We didn’t speak that way in 1994. (You can read this piece, which has many other time-specific racial revelations.)

In 2002, after Baker won three Manager of the Year awards, the same magazine hired me to do a 10-year review of his tenure. But what I quickly discovered was that management was preparing to fire him. I’m not a sports journalist, of course, but I had the local scoop of a lifetime, in sporting terms. Baker was recovering from prostate cancer, and I was lame enough to believe that would stop the Giants management from firing him.

Here’s what late team owner Peter Magowan told me: â€œI know the man was coming back from prostate cancer, and I’m well aware of what it can do. I lost a brother last December who had, among other things, prostate cancer. I have another brother with prostate cancer. But work is what it is. And with work comes responsibilities and, inevitably, expectations.

Almost 20 years later, I can’t believe he actually said that.

The rhythm continued. â€œI don’t think that as an organization we are getting the credit we should for the things that we have done,â€ Magowan told me. â€œAnd one of them is to consistently put good teams on the pitch. I mean, it’s great to quote Dusty. And I’m not trying to take anything away from Dusty. But when we look at his Manager of the Year awards, I think part of them reflects an â€œorganization of the yearâ€ type award. He continued, â€œI’m just a bit resentful. I think the players didn’t get the credit they should have.

The highlight of my career, in terms of national fame, came when World Series announcer Tim McCarver told the crowd in Game 5 of the World Series (it’s not online either!) Something like: “If you want to know why Dusty Baker doesn’t have a contract extension, you have to read an article in San Francisco magazine. â€œMy little Nokia phone blew up – with phone calls I couldn’t get SMS back then. The Giants won this game 16-4. You read that right. They went up 3-2.

Of course, they would lose the series. And Baker would lose his job. And I would still feel guilty – and honestly, I just found out, I still do – as if by exposing the loophole, I had widened it. As if, by revealing a decision rooted in many issues, but mostly racial, I was encouraging a decision that I will always believe to be rooted primarily in racism.

Baker went on to lead the Chicago Cubs (no comment), the Cincinnati Reds (read this piece by my friend Howard Bryant, in which they discuss local Underground Railroad sites and why he prayed for Barack Obama), the Washington Nationals and now the Houston Astros. He and his team faced rowdiness on the road throughout the season due to the 2017 fraud scandal (in which, of course, Baker was not involved).

But the Astros hired the most upright man in Major League Baseball, and he managed it.

â€œThis team has a very strong spirit,â€ Baker told reporters. “It’s a strong will – to face adversity, to face boos, to face the amount of negative energy that has been sent to us throughout the year.”

A few writers have noticed what has happened in the past 30 years, and they have written about it. Claire Smith captured a lot here. Why doesn’t he brag about the five teams, two leagues, three playoffs? â€œI don’t really think about anything other than why was I on so many different teams,â€ Baker said. â€œI’m serious. I feel lucky that I got so many jobs, but I feel unhappy that I didn’t have to lose jobs when I was winning.

Or like David Steele wrote: “Managing five teams up to the division crowns makes him look big and makes baseball look small.”

The Astros lost 3-2 heading into Game 6 on Tuesday night. Hoping they reverse my 2002 3-2 nightmare. Either way, the idea that this is Baker’s “last chance” in a World Series ring drives me crazy. He is expected to be back in Houston next year. There are so many mediocre managers in MLB, I would go to sleep before I name them all. They are all white.

Could it be a matter of race? You tell me.