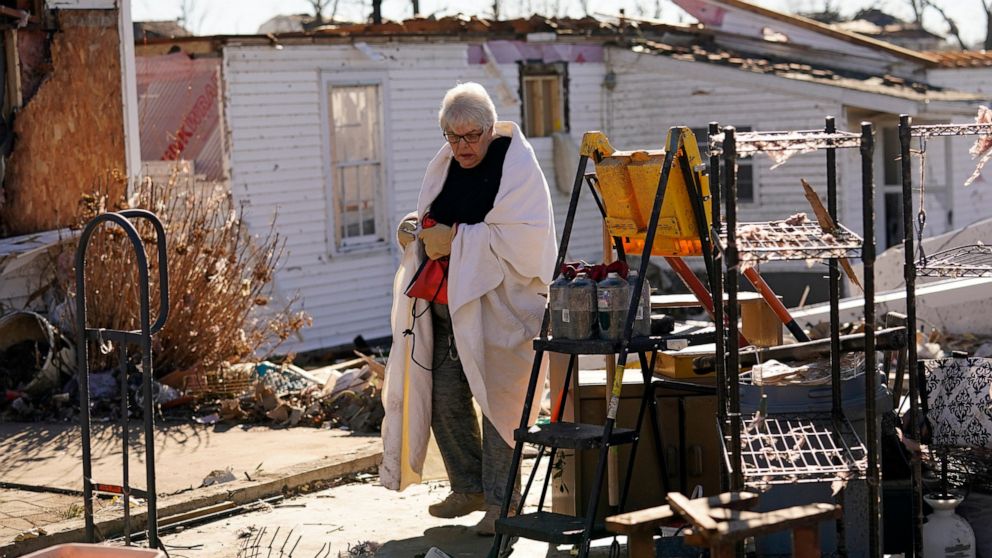 MAYFIELD, Ky. – An employee at the Kentucky Candle Factory, where eight workers were killed by a tornado, said on Tuesday that a supervisor threatened her in writing with disciplinary action if she returned home early to approaching thunderstorms.

Haley Conder, who worked at the Mayfield consumer products factory for 10 years, also asked why the company had not encouraged workers to return home – or at least given them a better understanding of the danger – between a first tornado siren around 6 a.m. Friday afternoon and another around 9 p.m., shortly before the tornado hit.

“They (the company) had from 6 a.m. to 9 a.m. to get us home, to really tell us what was going on and that we had to prepare for the worst,” Conder told The Associated Press in a report. telephone interview. â€œIt was nothing like that. No supervisor told us what was really going on.

A company spokesperson insisted employees were free to leave at any time.

Gov. Andy Beshear told reporters the Kentucky Division of Occupational Safety and Health will conduct a review. This kind of investigation is routine every time workers are killed on the job.

â€œSo that shouldn’t suggest that there was wrongdoing. But what this should give people confidence in is that we will get to the bottom of what happened, â€he said.

Conder, 29, said her supervisor threatened to write it down if she left early and the accumulated paperwork may lead to her firing.

More than 100 people were working on holiday candle orders when the twister razed the facility. The extent of the damage initially raised fears that dozens of workers were found dead in the rubble.

The company later said that many of the surviving employees left the site and went to homes without phone service, adding to the confusion over who was missing.

Since then, all of the workers have been located, according to state and local officials who spoke to the company. Louisville emergency management director EJ Meiman said Monday evening that authorities “now have a high level of confidence that no one is staying in this building.”

The factory supplies candles to retailers, including Bath & Body Works. It is the third largest employer in the county.

Mayfield Consumer Products spokesperson Bob Ferguson, who works for an outside communications firm, said the company welcomes a state review and will cooperate.

Ferguson denied that workers were stranded at the plant or would face retaliation if they left.

“Not true. It is absolutely not true. We have followed our protocols to the letter. The employees, if they decide to leave, they are free to leave,” he said.

Due to a tight labor market, the company has relaxed some of its procedures so that employees are not required to give a reason if they have to leave work during a shift, Ferguson said.

NBC News first reported that employees said they were threatened with disciplinary action if they left early.

Mayfield, home to 10,000 residents and the candle factory, suffered the worst damage in the country. The tornado outbreak that killed at least 88 people – including 74 in Kentucky – has taken a course of devastation from Arkansas, where a nursing home was destroyed, to Illinois, where a distribution center Amazon was badly damaged.

Six people died in the Illinois warehouse collapse, and the Federal Occupational Safety and Health Administration has launched an investigation into what happened there. The tornadoes also killed four people in Tennessee, two in Arkansas and two in Missouri.

Conder said the employees took shelter inside the building after the first siren, but were then told to return to work about half an hour later “as if it was a normal day.”

â€œSome of us just had no idea,â€ she added. “Unless the family called us and let us knowâ€¦ we had no idea at all this was coming for us.”

Employees took shelter again after the 9pm tornado siren. Conder was in a bathroom when the storm hit.

â€œI look up and the ceiling collapses, as if the ocean is just coming towards me,â€ she said, adding that she had been stuck in the rubble for about an hour.

Mark Saxton worked as a forklift truck driver. After the first storm siren, he said employees were told to return to work.

â€œI feel like production was a priority rather than letting everyone come home,â€ Saxton said Tuesday in a telephone interview. He said he was not threatened with any disciplinary action.

When the second storm siren sounded, he said he had taken refuge with the other workers. It wasn’t long before he heard a loud bang and “everything shook”.

He said he fell to the floor, got into a fetal position and “that’s when it all started to fall – the walls and everything.” He was trapped by a slab of a concrete wall but was able to escape.